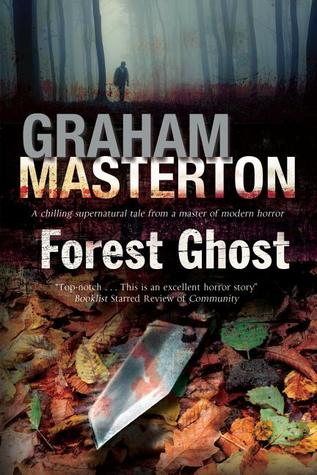 Modern-day America. Fifteen Boy Scouts and their seven adult leaders are found to have committed suicide in the forest of a scout reservation. One of the dead boys is a friend of Sparky Wallace, whose father Jack runs a Polish restaurant in Chicago. Drawn into investigating the suicides, Jack discovers a connection with his own grandfather, who killed himself in the Kampinos Forest in Poland when he was fighting the Nazis in World War II.

Together, Jack and Sparky travel to Poland to unlock the terrifying mystery of what really makes people panic in the forest. But before they can do so, they have to experience panic for themselves, and reach the very brink of madness.

A chilling supernatural thriller concerning an elemental force lurking in the world’s forests, an entity that wields fear as a weapon, leaving madness and suicide in it’s wake. Masterton mixes mythology and a touch of Machen into a potent cocktail that will keep you out of the woods permanently.

Graham Masterton’s debut as a horror author began with The Manitou in 1976, a chilling tale of a Native American medicine man reborn in the present day to exact his revenge on the white man. It became an instant bestseller and was filmed with Tony Curtis, Susan Strasberg, Burgess Meredith, Michael Ansara, Stella Stevens and Ann Sothern.

Since then Graham has published more than 35 horror novels, including Charnel House, which was awarded a Special Edgar by Mystery Writers of America; Mirror, which was awarded a Silver Medal by West Coast Review of Books; and Family Portrait, an update of Oscar Wilde’s tale, The Picture of Dorian Gray, which was the only non-French winner of the prestigious Prix Julia Verlanger in France.

Three of Graham’s stories were filmed for TV in Tony Scott’s horror series The Hunger, and ‘The Secret Shih-Tan’, starring Jason Scott Lee, was shortlisted for a Bram Stoker Award by the Horror Writers Association. Another short story, ‘Underbed’, about a boy finding a mysterious world underneath his blankets, was voted best short story by Horror Critics Guild.

Graham’s latest horror novels to be published in the United States are Spirit (Leisure, December, 2001); Trauma, (Signet, January, 2002) and The Chosen Child (Tor, January, 2002). Motion picture rights in Trauma have been optioned by Jonathan Mostow, who directed U-571. The Chosen Child, set in the sewers of Warsaw, was named Best Horror Novel of the Year by Science Fiction Chronicle and highly praised in Publisher’s Weekly.

Altogether Graham has written more than a hundred novels ranging from thrillers (The Sweetman Curve, Ikon) to disaster novels (Plague, Famine) to historical sagas (Rich and Maiden Voyage – both appeared in the New York Times bestseller list). He has published four collections of short stories, Fortnight of Fear, Flights of Fear, Faces of Fear and Feelings of Fear.

He has also written horror novels for children (House of Bones, Hair-Raiser) and has just finished the fifth volume in a very popular series for young adults, Rook, based on the adventures of an idiosyncratic remedial English teacher in a Los Angeles community college who has the facility to see ghosts.

A critical biography and bibliography, Manitou Man, was published in 1999 by the British Fantasy Society.

Graham Masterton was born in Edinburgh in 1946. His grandfather was Thomas Thorne Baker, the eminent scientist who invented DayGlo and was the first man to transmit news photographs by wireless. After training as a newspaper reporter, Graham went on to edit the new British men’s magazine Mayfair, where he encouraged William Burroughs to develop a series of scientific and philosophical articles which eventually became Burroughs’ novel The Wild Boys. At the age of 24, Graham was appointed executive editor of both Penthouse and Penthouse Forum magazines. At this time he started to write a bestselling series of sex ‘how-to’ books including How To Drive Your Man Wild In Bed which has sold over 3 million copies worldwide. His latest, Wild Sex For New Lovers is published by Penguin Putnam in January, 2001. He is a regular contributor to Cosmopolitan, Men’s Health, Woman, Woman’s Own and other mass-market self-improvement magazines.

He lives in Surrey, England (sadly his wife, Wiescka died in April 2011). He has just finished writing a black thriller featuring Ireland’s only female detective superintendent, Katie Maguire, set in the Cork underworld; and a dark fantasy, Jessica’s Angel, about a girl’s search for five supposedly-dead children.

He has written several new short stories and is currently working on a new horror novel, as yet untitled.

{Review} The Reaper by Sean Liebling