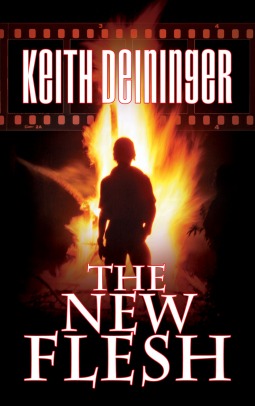 When Jake, a shy fourth grader, starts a fire in the woods behind his school that gets away from him, he's punished and forgiven. But his life is never the same. Three years after the incident, the dreams begin. Dreams of flames and a strange creature Jake calls The Melting Man. Waiting and watching with an insidious grin, it lures him deeper and deeper into his darkest fears, and closer to an otherworld of fire and torment. And then, Jake begins to see The Melting Man wherever he goes.

As his dreams bleed into waking life, Jake realizes he's being dragged toward a very real apocalypse, and that The Melting Man's powers are growing stronger. Asleep, awake, or trapped between the two, Jake must fight to understand not only who and what The Melting Man is and what the dreams mean, but how this creature and Jake's mysterious family legacy ties into a disturbing, violent and enigmatic film associated with his father, a failed screenwriter.

But there may be no way to stop what has already begun...because this is a new nightmare...a new terror...a new Flesh...

THE NEW FLESH, the debut novel of horror, madness and suspense from Keith Deininger.

Jake, a shy boy with an imaginary friend, dreams about fire. A creature named the “Melting Man” calls for him, to hear his story, to hear his plea. As Jake grows, his dreams begin to interfere with the waking world. His sad, alcoholic mother, and his failure of a father, have something to do with his nightmares and the future he’s inevitably heading towards.

I was so caught up in this tale, I was smiling from the get-go. The characters drew me in and I was desperate to know their story. Keith did not disappoint as he hurdled us along on this family’s sorrowful tale.

I will definitely be reading more of Deininger’s work.

An award-winning writer and poet, Keith Deininger is the author of THE NEW FLESH, FEVERED HILLS, MARROW’S PIT (March 2014), and GHOSTS OF EDEN (Nov. 2014). He grew up in the American Southwest and currently resides in Albuquerque, New Mexico with his wife and their four dogs. He is a skeptic and a bit cynical.