HAD: Who are you and what do you do?

TEPE: Everyone calls me “Tepe” (Teep), and I’m becoming less and less likely to answer to my first name unless you’re my mother. Right now I’m working by day as a tech consultant at a popular retailer, and by night moonlighting as a vigilante superhero who’s main weapon is the Knitting Needle. Not really, but that’d be pretty rad. I’m an artist by trade; leatherwork, photography, and digital art being the stuff I prefer working with.

HAD: When did you get bit by the writing bug?

TEPE: I think it started back when I was a really little kid, in Pennsylvania visiting family and my cousins and I (I was probably around five? Six?) were super bored and my grandmother always had crayons and markers and paper for us to use when we were there. We all started writing stories, and I wrote this super-short one-paged thing that was horribly misspelled and almost made no sense but I remember being so proud of it- so proud that I might type it up and share it with you guys on my blog! Be on the lookout! Some of my poetry has been printed in my high school’s publications, and I’ve been writing since.

HAD: What’s on your TBR shelf?

TEPE: Oh Lord, you would ask. House of Leaves by Mark Danielewski is definitely at the top, I’ve started reading it like four times and it’s just huge and daunting, but I WILL get there, dammit! Frankenstein, Dracula – I’m big into classic horror. A Picture of Dorian Gray is another one I’d like to get to. Moving on to more modern stuff; The Farrowing (Jesse Wheeler), Cannibals of Candyland (Carlton Mellick III), and The Bighead (Edward Lee).

HAD: Just to change things up, we’d like you to fill in the blanks below:

I love getting out of my head… or so far in that I can’t tell where I am.

I always wanted to date a cartoon character.

I grind my teeth when I sleep.

Writing is sometimes the only way to stay sane.

My favorite scent is muggy rain.

HAD: Where did the inspiration for Slaughtertown Circus come from?

TEPE: Around Halloween I always watch haunted house walkthroughs because [SPOILER] I’m too much of a wimp to actually walk through one myself. So I’m watching a walkthrough and they go into this room with distorted clown faces EVERYWHERE, neon shapes on the walls, funhouse mirrors, TNT “explosions”, and general WTFery, and in my head I saw this desolate planet where all these clowns are freaking out, blowing themselves up and generally being spastic. I didn’t know what it was called at the time, but that was the birth of Kermisendia and Slaughtertown Circus.

HAD: Is Marbles written after someone you know?

TEPE: Marbles is me. She’s every facet of my personality that I have to keep a lid on in reality, and in Slaughtertown I was able to throw that lid away.

HAD: Xander was hilarious. Are you just as comedic?

TEPE: Hell, I’d like to think so. I don’t mean to squeeze my own boob, but HEEERNK!

HAD: What was the hardest part of writing about clowns?

TEPE: Clowns have a HUGE reputation already in the media – movies and books especially – and I wanted to stray as far away from the norm as I could. Whenever I told someone I was writing a book about clowns that come to Earth to – they’d immediately cut me off and say something about “Killer Clowns from Outer Space”. Or as soon as I mentioned these clowns not being human – it was “Oh, so like IT?” I’d say the hardest part was getting past the horde of people that automatically pushed my novel to the side with the preconception that it was going to be just some other clown book.

HAD: What’s your favorite line/scene from the story?

TEPE: I love when Marbles pulls Xander through the mirror into Kermisendia and the reader gets thrown inside his internal monologue. I had a fricking BLAST writing that sequence, though my friends and family probably didn’t, since I was locked into the mindset for a few days, walking around legitimately wanting a corn dog (which yes, I did get eventually) and talking in spazzy fragments. Sorry guys, haha!

HAD: Do you have any tips for writing bizarro?

TEPE: Eat a bar of chocolate before bed and keep a notepad on your nightstand.

HAD: What can we expect from you next?

TEPE: I’m currently writing notes for a book based around Jesse Wheeler’s Dinner at the Vomitropolis, which takes place in the same world, loosely titled The Fetish Farm. We’ll see how that goes. There may or may not be a few notes scratched out about a sequel to Slaughtertown Circus; we’ll just have to wait and see… 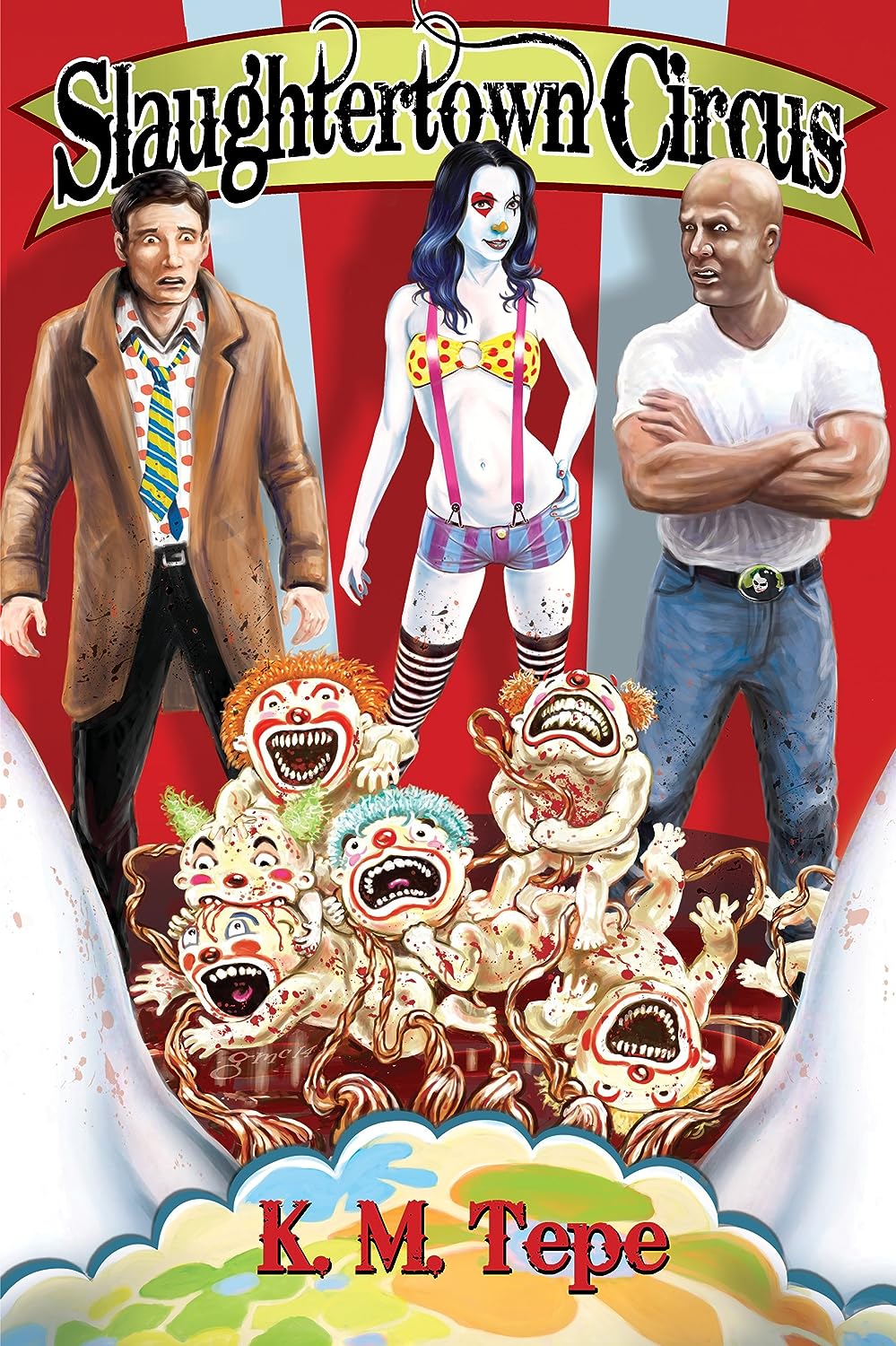 Go out and grab Slaughtertown Circus on Amazon

! Yes, it’s fantastic! You must read it to find out how Cotton Candy is made and what it can do to you. It’s not what you think. Oh, well, maybe it is. Still, Tepe is sure to teach you a thing or two about how clowns roll.
Thank you, Tepe, for taking the time to answer our questions. We wish you nothing but the best!

You can find Tepe here: