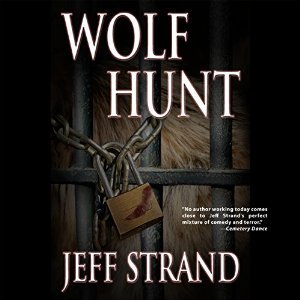 Two thugs. One innocent woman. And one VICIOUS frickin' werewolf.

Meet George and Lou, thugs for hire. The kind of intimidating-yet-friendly guys who will break your thumbs, but be polite about it.

Their latest assignment is to drive across Florida to deliver some precious cargo to a crime lord. The cargo: a man in a cage. Though Ivan seems perfectly human, they’re warned that he is, in fact, a bloodthirsty werewolf.

Unfortunately, Ivan doesn’t play by the usual werewolf rules, and the thugs find themselves suddenly responsible for a ferocious escaped beast. One who can transform at will. One who enjoys killing in human form as much as he enjoys killing as a monster.

If George and Lou want to save their careers, dozens of people, and their own lives, they need to recapture him. Because Ivan the werewolf is in the mood for a murder spree…

Two wise cracking lower level thugs take on the job of transporting a so-called werewolf named Ivan to a wealthy weirdo who wants him for nefarious purposes. The two figure it’ll be easy money. There’s no such thing as a real werewolf, right?

Things go awry, as they will. This is a novel written by Jeff Strand after all. Blood is shed and sarcasm is spewed hither and fro (along with a few body parts) as our tenacious thugs make one dumb move after another. It’s funny, they reminded me a little of those lovable nitwits from Home Alone at points, but it’s also brutal. This is a black comedy and I’m still not over an early scene involving dogs and probably never will be.

But that’s my problem.

Anyway, despite my sadness about a particular scene, the writing and the spectacular narration had an insidious power over me and I kept going, even when it took me to places I didn’t particularly want to visit. The story was nuts and the narration one of the best I’ve listened to in a good long while. He gave each character their own distinctive voice, didn’t go all fake falsetto on the women characters and really brought the scenes to life. Even when the story dragged here and there, I never found myself dozing and I credit that to the narrator.

I’d give the story a three and the narration a five. Guess I’ll have to settle for a four.

Jeff Strand is a four-time nominee (and zero-time winner, but c’mon, he lost to Stephen King TWICE!) of the Bram Stoker Award.

His novels are usually classified as horror, but they’re really all over the place, almost always with a great big dose of humor. He’s written five young adult novels that all fall into the “really goofy comedy” category.

He lives in Atlanta, Georgia with his wife and one gigantic freaking cat.

{Review} BRING HER BACK, by Jeff Strand